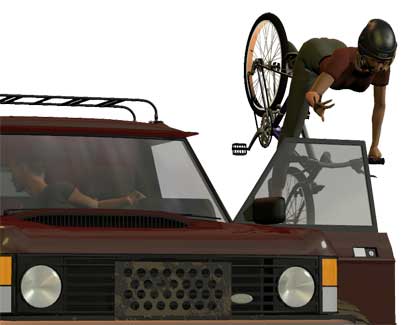 One of the more common and scary accident threats experienced by bicyclists biking anywhere there are parked cars on the side of the road is being "doored".

This is when a bicyclist is biking past either a line of parked cars, or even as few as one car, and the driver or a passenger opens the door quickly without looking to see whether or not there is a bike or car coming down the street.

Bicycle riders have the law on their side. Bicycle lanes put bicycle riders in the position to be exceptionally exposed to this type of road hazard where the bicycle rider may have no escape option: collide with the door or veer into oncoming traffic.

(1) A person commits the offense of improper opening or leaving open a vehicle door if the person does any of the following:

(a) Opens any door of a vehicle unless and until it is reasonably safe to do so and it can be done without interference with the movement of traffic, or with pedestrians and bicycles on sidewalks or shoulders.
(b) Leaves a door open on the side of a vehicle available to traffic, or to pedestrians or bicycles on sidewalks or shoulders for a period of time longer than necessary to load or unload passengers.

I have handled bicyclist car doored cases, these are too common with severe consequences for the cyclist.

As reported in The Oregonian after I filed a lawsuit in Multnomah County Circuit Court: Cyclist sues after Uber, private insurance fail to cover crash. The case was complicated because the driver was working for Uber at the time of the accident. The driver was cited by the Portland Police.

Lucas Root says he doesn't remember seeing the door that opened up in front of his bike, knocking him to the pavement and breaking out three teeth. [...] Indeed, two months after the July 2 crash for which the driver was cited by police, the driver's personal insurer declined to cover the loss. Three months later, Uber says its insurer is still reviewing the claim [...] according to a police report, 55-year-old Viktor Pavenko stopped to pick up a passenger. He opened his driver's side door, he told police, and Root, 30, crashed his bicycle into the door and fell to the pavement. Pavenko was cited for improper opening of a door.

Mike worked with me settle to a claim after I was doored and hospitalized while riding my bike. Mike and his team helped me navigate the complex insurance and claim process and ensured that I received a fair settlement. -->More

One of the more common accidents in urban cycling is getting doored.

Dooring accounts for 12 to 27 percent of urban car-bike collisions, making it one of the most common crash types.

Yet, tracking bike crashes by type is not readily available data.

In New York City from a very limited survey:

"NYC counted bike-related infractions at 11 locations found that dooring (including near-hits) is a pervasive phenomenon with 77 infractions over the two days of measurement, 19 of them on one street alone."
NYC Aims to Stop Bike "Dooring" by Targeting Taxis

Illinois is a state that tracks dooring as a subset of bicycle crash type; 3 years recent data show:

"In Chicago, one in five bike crashes were caused by a dooring incident."
Data from only STATE in USA that tracks dooring shows it is a big problem

Many drivers are distracted and not paying attention or seeing bikes. The car driver may be talking to passengers or may be busy with their cell phone or texting, even playing with the radio or eating. In these days of a populace distracted by hand-held devices, the possibility of a driver checking his or her smart phone as soon as he or she stops driving, but while leaving their car.

Learn The Dutch Reach: A No-Tech Way to Save Bicyclists' Lives (NYT article)

The "Dutch Reach" is a simple habit you can use which will help you always be turned and looking before opening your vehicle door. This method is just using your further arm to open the door so that your body is turned slightly and your head turned where you can see the bike lane or pedestrians before swinging the door open.

Here is a Massachusetts Department of Transportation video which demonstrates the simple Dutch Reach technique.